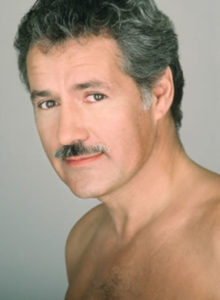 No shirt is manly enough for TREBEK!

I find the phenomena surrounding Chuck Norris as fascinating and hilarious as the next guy, I really do. But, at times, it’s a bit brawny.  Not everything can be solved with a roundhouse kick.  Therefore, here’s a new icon some of us nerdier types can get behind.  Plus, he’s just awesomer than Chuck Norris.  That’s right, I’m speaking of…Alex Trebek.

2. Guard dogs once tried to attack Alex Trebek. He confused them with a hockey stick and a “Daily Double”

4. Alex Trebek once bitch slapped Stephen Hawking for saying something totally stupid. Ask Stephen why he’s in the chair.

6. Alex Trebek likes to drink a pint before he goes onstage. A pint of Jeopardy loser’s blood, that is.

7. If you finish in the negative on Jeopardy, not only do you not go on to Final Jeopardy…you have to face Alex in the Backstage Commercial Break Arena. And Alex Trebek never loses.

8. Alex Trebek IS the Juggernaut, bitch!

9. The judges they never show on Jeopardy…All Alex Trebek.

10. When told to dumb down Jeopardy so the celebrity contestants could have a good time, Trebek said “They’re too stupid to have a good time.” And other “Road House” quotes.(Because Road House is secretly based on Alex Trebek’s life)

I’m starting to like this idea. I think this could catch on.

PS…I’ll try to find a more manly picture of Trebek next time. But…he does kinda look like Magnum in that one. Or rather…Magnum looks like him!  I’ve written several of these in the past, so be on the lookout for them here, as well as some new ones.