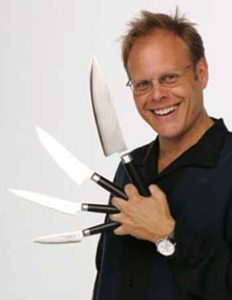 Freddy Krueger can suck it.

Alton Brown is the affable host of “Good Eats” on Food Network and the MC of “Iron Chef America” and a huge dork. Watching his show is like watching virtually any other cooking show mixed with Mr. Wizard. That being said, I think he’s a perfect candidate to take on Chuck Norris.

2. That loaves and fishes miracle thing? It was really just an episode of “Good Eats”.

3. Alton Brown showed America how to make the perfect waffle. Out of Chuck Norris.

4. There was once an episode of “Good Eats” that explained the scientific and cooking properties of water. It won the Nobel Prize simply because Alton Brown is an awesome host.

5. Alton Brown once forced Chuck Norris to eat an episode of “Walker: Texas Ranger” that he had recorded on videotape. The only seasoning Chuck was allowed? Kosher salt.

6. Atlanta is considering changing its name to “Browntown” simply because Alton lives in proximity.

7. There was once an episode of “Good Eats” that was so good, it brought about spontaneous orgasm in all who watched it, or made or served any of the food created in the episode. The best Chuck Norris can do is kick you in the face.

8. Those Shun knives that Alton Brown shills for? They’ve all been used on Chuck Norris at some point in time.

9. There is only one man that The Chairman on “Iron Chef America” will bow to in reality…and that man is Alton Brown.

10. The Waffler (one of Alton Brown’s character on “Good Eats”) is really Alton Brown in costume as he goes about town engaging in petty theft. In reality, he doesn’t steal bad waffles…he steals souls.