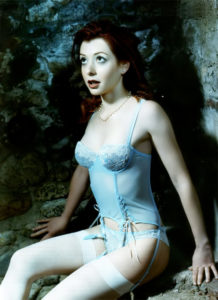 Somedays, like the day I found this picture…life is pretty good!

After looking over some of the posts that I used to start ManWithPez, I noticed that there was one ingredient missing, and that was the love, baby.  You can’t forget the loooove! (Yeah, I know it’d sound better coming from Barry White, but I can’t supply that.  Read this article out loud in your best White impression.  Barry, not Betty)  So, in what I’m hoping will be a regular article here, I’m going recognize a lady that most other nerds agree they want to nail…Did I say “want to nail”?  I meant to say that.  But, in the spirit of remaining a civilized man, we’re going to say “Find attractive” instead.

We’re going to start with one of the best, Alyson Hannigan.  Sure, she’s married (Damn your eyes, Alexis Denisoff!!!), has a child (Oh man!  He married her and he’s sleeping with her?  Who do you think you are, man?!) and is now a sitcom star instead of acting in what I’d like to affectionately call “Nerdbait”.  For example, the first thing I remember seeing her in was her second acting gig, My Stepmother is an Alien released in 1988.  Odder still, in this one, she was costarring with her soon to be Buffy boyfriend, Seth Green. We’ll get to credits in a second.

Alyson Hannigan was born in March of 1974 in Washington DC.  What do you know?  They CAN make awesome things in DC besides laws and controversy!  She moved to Atlanta after her parents divorce at the age of 2, and ended up graduating from North Hollywood High.  Yeah, we’re skipping a lot.  So, let’s just get to it.  Why is she on this list?  You ever heard of Buffy The Vampire Slayer?  Okay, this one time, at band camp…heh…sorry. Buffy The Vampire Slayer debuts in 1997, suddenly giving a name to “that girl that you’ve seen in all those things” (I think this was Hannigan’s legal name until Buffy gave her her real name back.  I could be mistaken).  Well, after Buffy, no one forgot her name.  However, during Buffy, up to a point, she was just a shy girl with a crush on Xander who refused to speak up.  Then came American Pie(1999) and American Pie 2(2001).  Granted, unlike her costar Shannon Elizabeth, Alyson didn’t whip off her clothes, but I suspect that if you ask someone after seeing the movie which character they remember, Hannigan’s foulmouthed sexual tutor Michelle will be the big answer.  There was something about this cute, socially awkward, motormouthed floutist and the way she said the word “Pussy”.

After that, things got interesting over on Buffy!  Willow (Hannigan’s character on the show) discovered that she had a magical ability.  In short order, she goes from being the quiet computer tutor on the show to being one of the most powerful characters in the Buffy universe.  She also got better clothes, and she jettisoned her werewolf boyfriend Oz (Seth Green) for an upgrade to Tara (Amber Benson).  I’m not suggesting that making the character a lesbian made her more attractive to men, because I always thought she was attractive.  Then again, I’m not every man, so, draw your own conclusions.  Along the way, she stopped to marry one of her cast members.  The aformentioned Alexis Denisoff (who played botched Watcher Wesley Wyndham-Pryce on Buffy, at once fostering hate of himself and inspiring geeks everywhere.  “If he can do it…you know…with someone like her…maybe I can…” You know, that sort of thing.)

From Buffy, Alyson went on to several smaller projects.  I’m not certain I’d call Date Movie (2006) a “smaller project”, or even a “project”, but she was funny in it.  She also starred in a stage production of When Harry Met Sally in London with Luke Perry, where, unfortunately, she kept her clothes on…again!   In 2005 she began acting as “Lily Aldrin” in the excellent How I Met Your Mother, where she still works today.  She’s still fostering hope for geeks, as her husband on the show, Marshall Eriksen is one of popular media’s biggest dorks!  As to why she’s on the list…well, did you look at the picture above?  She’s gorgeous, she’s a great actress who’s as funny as she is hot.  But, mostly, I just wanted a reason to post a picture of Alyson Hannigan.

So, there’s a look at Hot Nerd Crush #1.  This will be ongoing, and there’s lot’s of women out there, and I have a lot of free time on my hands.  So, until next week, this is ManWithPez signing off with absolutely no dirty thoughts in his head about witches, or foul mouthed floutists, or beer swilling schoolteachers.  Nope, none at all. (Seriously…can I get Doctor Bombay or someone in here to get Alyson Hannigan out of my head, please?)