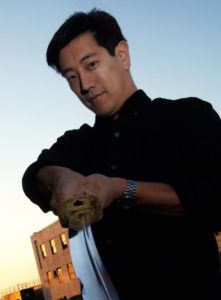 By now, you’re familiar with the concept.  Chuck Norris is great, yes, but he’s a little much for some of the nerds out there.  Ironic, considering it was internet nerds that fueled the foofaraw from the start.  So, let’s pit Chuck (like we have previously) against someone a little more our speed, and hopefully, wit will take might in the end.  With that in mind, here’s a list inspired by Mythbusters build-team member (and forever crush of ThatWeirdGirl), Grant Imahara.
1.  While Grant Imahara would never sink so low as to engage in a fistfight with Chuck Norris, in the time it took you to read this sentence, he’s already built a robot to do it for him.

2.  Grant Imahara, PHd in robotics by the age of three.  With a minor in kicking ass!

3.  That bike accident on Mythbusters where Tori Belici fell on his face?  Engineered by Grant long before he was even cast on the show.  That’s foresight, my friends.

4.  Grant and Chuck Norris have actually fought before.  They were allowed weapons.  Chuck brought his legs, martial arts ability,  and his beard.  Grant brought the “HWACHAAAA!!!”  Pieces of Chuck Norris were found for miles around afterward.

5.  Beyond Thunderdome was actually a dramatization of a spat between Adam Savage and Grant Imahara.  Two men entered, and one man left.   That is, after Grant showed Adam just how “Savage” he really was.

7.  The real reason that Jamie Hyneman is bald?  Stress and worry over the very possibility of having to fight the much younger Grant’s robot on Battlebots.

8.  The true reason that Chuck Norris is afraid of Grant Imahara?  That giant sword-swinging machine they built on Mythbusters wasn’t built to swing at superhuman speeds.  It simply matches Grant’s actual speed.

9.  Grant Imahara worked on R2-D2 for the Star Wars franchise.  He’s built several working robots in a short amount of time to aid in Mythbusting.  Chuck Norris has a beard.  You make the call.

10.  As you’re reading this right now, Grant Imahara has started a horrible Rube Goldberg device via remote control that will blow up Chuck Norris’s house next year.  You heard it here first.

And, there’s ten reasons why Chuck Norris would (probably) lose in a fight with Grant Imahara.  I’m sorry…I meant Mr. Imahara.  I don’t know that I want to be on that man’s radar.  I mean, he whips up robots like he does…makes me wonder if he has ACTUAL radar!