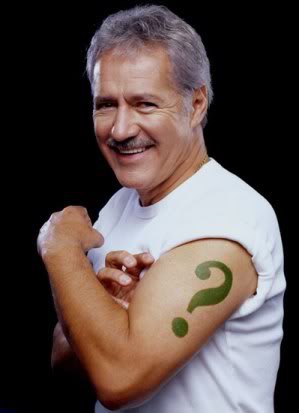 This man is so awesome that even his OWN BODY has to answer in the form of a question!

That’s right, sports fans! More of Alex Trebek goodness from me: ManWithPez. Enjoy!  This is a placeholder, as I’m writing up some new ones to take its place on Fridays.  Promise!

1. The FCC Censors have to keep a close eye on Jeopardy. The reason: Whenever a contestant bets less than a true Daily Double, Alex Trebek invariably calls them a pussy.

2. Alex Trebek once met with the Queen of England. His introduction: “I’m Alex Trebek, bitch!” She knighted him on the spot. That’s Sir Alex Trebek to you and me.

3. The episode of “The X-Files” that Alex Trebek appeared in was almost called “Alex Trebek’s Jose Chung’s From Outer Space Starring Alex Trebek”. TV Guide couldn’t fit it on one page. Alex Trebek cancelled his subscription, and TV Guide circulation went down 83%.

5. Alex Trebek brings carnage one question at a time at 6:30pm CST EVERY DAY. The best Chuck Norris could muster was Walker once a week. Pansy.

6. Chuck Norris is too stupid to appear on Celebrity Jeopardy (and that’s saying something) per Alex Trebek, because Alex Trebek fears no man.

8. Alex Trebek didn’t shave off his mustache. It was afraid of his superior intellect and snuck off one night, never to return.

9. You remember on the Smurfs whenever Brainy would run his mouth, and someone would toss him over a hill? Alex Trebek did that to Ken Jennings. Twice.

There you go. Ten more for you…and me. Because Alex Trebek allowed me to do it. No other reason, really.  These will continue, because frankly, I’m having too much fun not to keep doing them.  Also, if you have any suggestions about who you want to see a list about, please, comment below, and I’ll give it all due consideration.  Thanks!