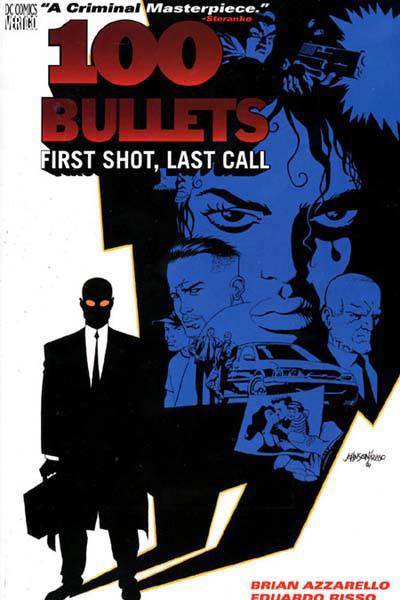 100 Bullets is the name of a gripping comic series published between 1999 and 2009.  a crime genre comic, the premise was fairly unique.  Individuals were given an attache case with 100 untraceable bullets and undeniable evidence against someone they should want revenge against.  Providing the cases and evidence was a shadowy agency whose origins were not revealed in this first of several volumes, but there is a glance at a much larger beast at work.

The first story concerns Isabel (Dizzy) Cordova whose husband and child were gunned down while she was in prison.  Dizzy bounces around outside of prison, uncertain what to do with herself and discovering she doesn’t really fit in to life without her family. As she was in a gang, she was certain that her family’s drive-by shooting deaths were caused by a rival gang.  Until Agent Graves shows up with his attache case and clear evidence that a couple of corrupt cops, not a rival gang, killed her kin.  While that descriptor seems like a heap of information and probably contains too many spoilers, the truth is that like Volume 1 against the rest of 100 Bullets, this is just the tip of a vast iceberg.

There’s a second story in Volume 1, concerning a man who was framed for child pornography, and while it doesn’t connect as well Dizzy’s story, it’s just us compelling.  Not everyone who receives a case can handle the burden, which I think will prove to be the point when all is said and done.

My only real complaint with 100 Bullets (which has seen some press lately as several people have wanted to adapt it into other media, a format change it is probably well suited for) is that it tends to be wordy unnecessarily.  There’s nothing wrong with exposition, but Dizzy’s arc could have been written in two issues instead of three.  Too much time was taken to establish that she didn’t fit in anywhere when the point had been made already. But, if you can handle your comics with more words than most (and, lets face it, if you’re already a fan of Azzarello’s or even someone like Brian Michael Bendis, then this shouldn’t be a problem) then the mystery and crime noir style of 100 Bullets is tailor made for you.

100 Bullets Volume 1:  First Shot,Last Call is available from Amazon and most other booksellers.