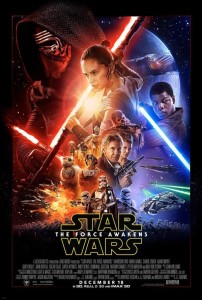 Over the weekend the poster for a little independent film called Star Wars Episode VII:  The Force Awakens dropped ahead of the final trailer coming very soon.  I’m really pulling for this small release, and I hope they can recoup their money.  Sci-fi is such a risky gamble these days, but I’m sure all will be fine.

And, like the rest of the nerds on the Internet, I’d like to bitch about where Luke Skywalker is in this poster?  What?  Did the Jedi Master have to head to the can?  What good is The Force is you can’t even use it to hold off inconvenient…urges?

Actually, is it December 18th, already?  I don’t go to many midnight movie screening anymore, but I’ll probably be in line for this.  Mostly because the ad campaigns have shrewdly built upon nostalgia as opposed to baiting Star Wars fans with ANY new content like a certain set of prequels did.

Anyways, have a trailer!