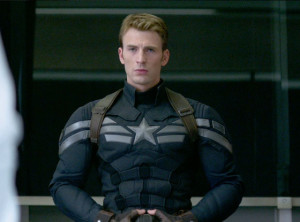 If you want some comic book credentials, he’s got them:  The Losers, Fantastic Four, Snowpiercer, and the amazing performance he gave in Scott Pilgrim, and any one of those would have been enough for him to be included as a Hot Nerd Mancrush.  But you know why he’s here.

Actually, that IS the reason he’s here.  And if you haven’t seen that movie, you really, really should (and I’m certain that it’s going to end up on Find That Film).  But you came here because he’s Captain America, and the reason I didn’t mention that first is that Captain America as a character isn’t as interesting to me as the reasons that Evans likes playing him.  He sees the good in what has become from time to time, a controversial character.  He’s genuinely enjoying playing someone he would actually love to be himself.

Plus, you know…he looks the way he does.  But that’s neither here nor there.  He deserves to be here because of that oft-shown picture of him sweeping up the set after a scene from The Avengers.  You know the one I’m talking about.

Included below is that trailer for Sunshine, a film that Chris Evans himself claims is his favorite of the ones he’s appeared in.