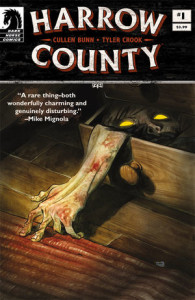 I don’t know if that’s more or less embarrassing than some of the things I’ve kept in my drawers.

While I’ve loved the genre of horror ever since I was a little kid, I’ve never really dug horror comics.  Call it the commonality between me and Corey Haim’s character from The Lost Boys.  That being said, of late I’ve read more than a few that are making me change my mind.  Chief among them is Harrow County.  Coming from a rural community the way I have (Kentucky), there are parts of this comic that ring truer than they probably should, given that it’s a slow moving revenge tale about a murdered witch.  The art, writing, setting, characters, frankly everything involved combine to bring horror back to a format which, since it’s inception, has been somewhat goofy.  Come on, horror comics, and yes, I’m thinking about some of the old EC variety, have always been somewhat silly.  Like, Tomb of Dracula, Vampirella, Weird Tales-variety silly.  There is none of that in Harrow County, and from the second page when a murdered witch vows revenge on her killers, I was hooked.  There are genuinely revolting things in Harrow County, but there are acts of heroism and kindness.  I am at once repulsed and warmed by the combination, and I can not recommend Harrow County enough.  Find it, wait for it to be collected, borrow it, whatever you have to do, but check this out when you can. 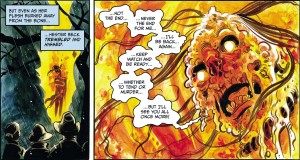 I guess you really do need to mean the things you say when you’re on fire, hanging from a tree.