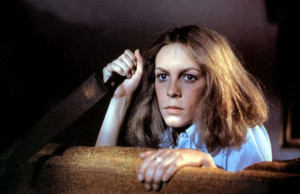 If you could stop dropping knives, Laurie, that’d be great.

I’m not going to say much about the seminal autumn horror film Halloween, except to say this:  It shouldn’t really be on this list.  Why?

Well, California in the middle of May isn’t exactly what I’d call “autumnal”. If you look, of course, you can tell. But, that’s the truly great trick of John Carpenter‘s masterpiece.  It is so atmospheric, both of the time it’s locked into, and the genre of horror, that it makes you not notice that every tree in the background of what is supposed Illinois in October is bright, vivacious GREEN!  You believe this movie takes place at Halloween because besides being told so, the mood is so brilliantly captured through the warm light and the music that your brain is willingly tricked into buying it!

Add into that your two heroes!  Laurie Strode as acted by Jamie Lee Curtis is an archetype of horror, but there is a very good reason for that.  She’s not the first “Final Girl” but she’s one of the best!  She’s smart, quick, resourceful, and when all is said and done, you understand that she is a survivor for just those qualities!  And Donald Pleasence as Dr. Sam Loomis is amazing!  He’s not given a lot to say, but he makes everything he does and 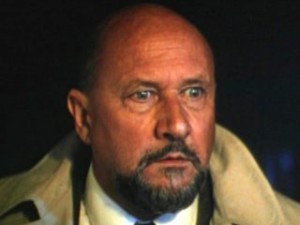 The kindly old doctor who WILL SHOOT YOU IN THE FACE!!!

say count.  He brings some much needed gravity to what otherwise would be a romp in the babysitting/slashing horror park.

There’s a reason why Halloween is an iconic horror film, and besides the masterful physical performance of Nick Castle as The Shape, I think it can be found in a fantastic combination of things that led to Halloween being one of the most successful independent films of all time!  It’s the right time of the year!  Watch it!  Watch it again!  Hell, watch it anytime!  It holds up!

Oh…and special shout out to Nancy Kyes who left quite the impression on a young BoyWithPez.  Ohhhhh yeah.