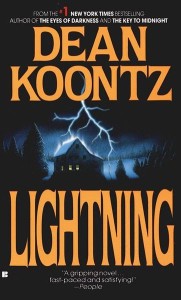 The cover of the book I carried around throughout high school. If that’s an endorsement…

There are plenty of people who will tell you that they don’t like Dean Koontz writing style because he has become too repetitive. In some ways, that’s true.  There are several books of his that adhere to a pattern of a dog, an independently wealthy protagonist, an antagonist with a psychological quirk, unrelenting chase scenes, and buried secrets.  But, if you hit on a formula that worked, wouldn’t you exploit it?

Lightning is not in the ordinary Dean Koontz mold.  It is, first and foremost, an action novel.  A novel that you must wait halfway through to discover WHY it’s an action novel!  And when you find out, the payoff is simply amazing.  Now, if you’ve stuck with us this far, then you know that this is time travel month at TwoGeeksInBed, so, yes, as a spoiler I will tell you that this decades old book uses time travel as a narrative mechanism.  The story concerns itself with a young girl named Laura, and the guardian angel that visits her whenever things are about to go batshit in her life.  Think about it.  You see someone who saves you every time you end up in some trouble…wouldn’t you be wary of any appearance by him?  This book uses its time travel mechanism more neatly than most hard science fiction novels tend to even attempt!  If you’ve been holding back on Koontz because you don’t think he’s intellectual enough, or that you think he’s a pale Stephen King imitator (NEITHER of these things is true, by the way) then this is the book of his that you should start with.

Also, it’s one of my favorite novels.