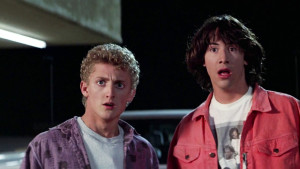 Bill and Ted’s Excellent Adventure brought something back to science fiction cinema that had been missing for some time:  FUN!  If you remember nothing else about Bill and Ted remember that it is a total blast to watch!  Granted it’s fun in the face of a glaring time paradox, but it’s still one of the most fun science fiction movies ever made.

When Bill and Ted are threatened with failing a history course, a benefactor from the future turns up with a time machine made to look like a phone booth so that they may make a truly grade-salvaging final presentation.  The only problem is that once Bill and Ted remove the historical figures from history and bring them to 1989 San Dimas…no one should know who they are!  They’ve been removed from the flow of time and therefore shouldn’t be remembered.  But who cares when your movies is so much fun?!  Who cares 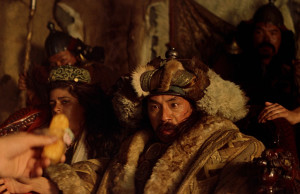 Genghis Khan lured with a Twinkie? Yeah…okay. I can see it.

when the historical figures including Genghis Khan, Abe Lincoln, Billy the Kid, and (most memorably) Joan of Arc all wreak havoc on a shopping mall in 1989 to the tune of Extreme’s Play With Me?!  NO ONE CARES, THAT’S WHO!

I would also like to point out that Rufus, the benefactor who helps out our team is given a memorable turn from George Carlin, and is one of the reasons to watch both this, and the sequel Bill and Ted’s Bogus Journey.  Frankly it’s just great to see the guy again.