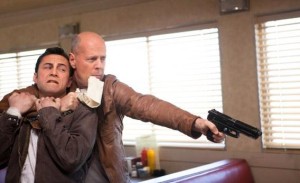 Apparently one of the cardinal rules in time travel is that you shouldn’t have too much interaction with yourself along your own timeline, or you’ll screw things up.  The plot of Looper not only has past and future selves fighting each other…they do it gleefully!

As a time travel film, Looper mostly works.  As an action film it most definitely works.  But most people came to see this film because of the trailers featuring Joseph Gordon-Levitt made up as a young Bruce Willis (of all people)!  Based on the makeup alone, the concept fails utterly.  It’s a great attempt, and remarkable makeup work, but the true star here is Gordon-Levitt’s commitment to making you think he IS a young Bruce Willis.  Throw in 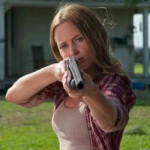 C’mon Emily. You don’t need that gun to get what you want.

Emily Blunt (who seems to be making a habit of starring in time travel films) as a young mother who will go to any lengths to protect her child from nearly impossible to calculate odds, and you definitely have a movie that is more than worth seeing.

Is time travel as a concept soundly represented here?  Yes and no.  I would say that in this form it’s subjective, and it is up to the viewer to determine if the rules have been kept to.  Either way, it’s an entertaining ride, and well worth your time.