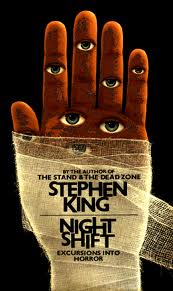 Christmas 1983.  I unwrapped an unassuming little package with red foil and a green bow.  Inside was the paperback edition of Night Shift by Stephen King.  I was 8.  It has amounted to my favorite Christmas gift of all time.

The stories in Stephen King’s first short story collection are magnificent, but I won’t lie to you with nostalgia’s all-seeing eye.  They are dated somewhat.  To me, that just adds to the charm.  Of import here are the beginnings and end (sort-of) of that vampire-filled town ‘Salem’s Lot.  The Children of the Corn put in their first appearance here.  There’s a Lawnmower Man.  Captain Trips takes a Night Surf.  A Boogeyman scares the bejesus out of young ManWithPez (and continues now that he’s a father, too).  A young man in college Knows What You Need, while Springheel Jack terrorizes another college during a Strawberry Spring.  This is an amazing treasure trove of imagination and terror and it’s a shame that even the people who are more recently into King that I know seem to skip his anthologies.  Short stories and novellas, for my money, are where Stephen King really shines. 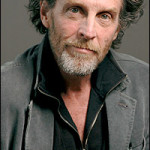 There is a beautiful audiobook presentation of Night Shift read by John Glover, who you may remember better as Lionel Luthor from Smallville.  His reading of Jerusalem’s Lot is legendary, and shouldn’t be missed by fans of either him or King, or fans of literature in general.  Give it a look.  You won’t be disappointed.