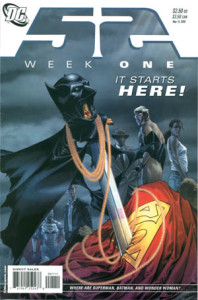 With Legends of Tomorrow on it’s way in a couple of weeks, lets take a look at one of the comic events that partially triggered what I’m hoping will be a watchable adventure show (even if it appears that the Time Sphere isn’t a part of it…blech)

52 chronicles what happened in the missing year of DC continuity that happened between the end of Infinite Crisis and the restructuring of the universe (or, multiverse, as it turned out.).  It saw Black Adam go insane (well, insaner) and kill whoever got in his damn way.  It saw the temporary retirement of the Trinity (Batman, Superman, and Wonder Woman), and, for me personally, it solidified Booster Gold as my favorite hero in comics history!

Most importantly on a personal note, the end of 52 kicked off Booster Gold volume 2, a comic series in which Rip Hunter takes Booster Gold to right some of the more egregious wrongs in the DC universe’s time stream.  It was an absolute blast to read, and 52 was the perfect lead-in for it, never mind being one of the more compelling slow burn reads, ever!  Be forewarned about trying to take on 52, though…it is, without add-ins, or separate minis, 52 ISSUES LONG!  But it is worth all time and effort to read, as its various conclusions are some of the most satisfying to longtime comics readers.  (The World War III mini during issues #50 to #52 is a particularly grim read, but boy was it worth seeing!)  So, track this one down.  Shouldn’t be hard.  There are several trade paperbacks of the entire series out there.  Just check out the first one and see if it’s for you.  Don’t be surprised if Booster Gold isn’t the hero he will become yet.  If 52 accomplishes nothing else for you, it does usher in the notion that Booster Gold is the greatest hero you’ve never known!