They’ve got 99 problems, and this bitch is one.

There are few horror films, or any other kind of film really, that can rival John Carpenter‘s 1982 version of The Thing for paranoia or tension.  In a film where anyone can be a killer, or a killer hiding in a friendly guise, your options for trusting those who you have known for any amount of time drop to zero.

The setting of the Arctic Circle only adds to the danger that there’s no escape from the thing that can look like anyone or anything it wants.  So, it’s either an horrific death at the hands of an extraterrestrial menace, or a slow (but not that slow) death at the hands of the environment that you have to fight every bit as much as you do the monster inside!  No other film maker but John Carpenter would lend this loving remake of a Howard Hawks film the credence and importance it deserves.  But more on The Thing From Another World in a different Four Films article. 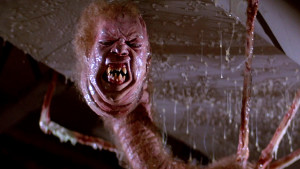 Hey! What’ve I told you kids about rough housing on the ceiling?!

Wilford Brimley (?!) is absolutely wonderful in this movie!  There’s a canny sort of danger to his character, that while he acts like he knows what’s going on most of the time…there might just be a reason for that!  You can’t talk about The Thing without talking Rob Bottin‘s magnificent special effects that still stand as tall today, 33 years later, as they when they terrified audiences in 1982.  It would also be remiss, I think, to not mention Ennio Morricone‘s beautifully minimalistic music score and how scary it can be to listen to it in the dark. This is just a craftily edited, expertly directed and acted (thank you, Kurt Russell, but that goes without saying) gorgeously shot study in how close-quarters horror should be accomplished.  So, now that it’s nice and cold outside, take the time to peruse one of the better horror movies ever made.

Don’t forget to look to the skies, though.