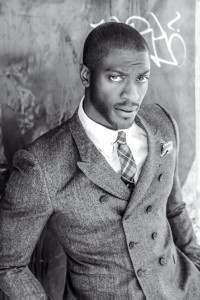 I figured since my counterpart is crushing Kane this week, I’d talk about one of Kane’s costars. Leverage was my first real introduction to Aldis Hodge. I know he got to kill Sam over on Supernatural. He even played some football under the Friday Night Lights. I either didn’t notice or didn’t watch his early stuff. Bad on me. Aldis is a delight both on and off screen.

What else can I tell you? He was on the big screen last summer as MC Ren in the NWA loosely told biopic Straight Outta Compton. He’s been heating up the small screen in Turn in a huge departure from Leverage’s lovable Hardison. Fun fact: he was in two Die Hard movies but as different people. Aldis has been in nearly every genre (his Western pilot was not picked up). You can see him in the 60s, the 1700s, war, tech, procedural, zombie, and romance. I think he’s developing a very nice resume.

I know there was push for him to be cast as Black Panther, but I’m glad it didn’t go his way. I’d hate for him to be tied up in a five movie series that played havoc on his shooting schedule.

It’s the Age of the Geek, baby.