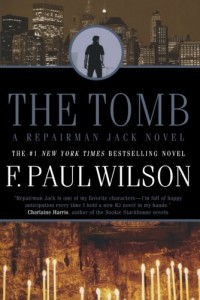 If you don’t know who Repairman Jack is, well, I feel sorry for you.  For you have truly let something entertaining and compelling beyond words get past you, and you need to rectify the matter post haste!  The first Repairman Jack novel, The Tomb, sets the stage for you to get sucked into the world of a man who truly trusts no one, and most often is proven to have the right mindset.  On top of being a mild paranoiac, Jack helps people by repairing, or “fixing” wrongs that can’t be righted any other way.  F. Paul Wilson continues the Adversary Cycle, begun with a bang in the pages of The Keep, here with The Tomb.  But if you thought just reading the six novels in that Cycle would give you the whole story, you couldn’t be more incorrect.  Luckily for you, Wilson’s Repairman Jack books are compulsively readable.

Even though Repairman Jack gets his start here, The Tomb is not even where I heard of the character for the first time.  I read the short story “A Day in the Life” back when I was a teenager (But well after I had read The Keep after a suggestion from my stepmother) and I was 100% hooked on the clever and somewhat violent world of Repairman Jack.  And the truly great thing about Jack is that if you like him (and you’d better if you know what’s good for you) there’s SO MUCH material to dive into.  The Tomb is the beginning, and what a grand slam of a start it is.  It introduces us to the first two major loves of Jack’s life, his girlfriend Gia and her daughter Vicky.  It also introduces us to the creatures Jack will have more than a few run-ins with throughout the series:  The Rakoshi.  What are these horrible beasts, and what are they up to?  The Tomb is a great read and paced just below breakneck, but wow!  What a rush!  Stop reading this and get started down the road to learning more about Repairman Jack!