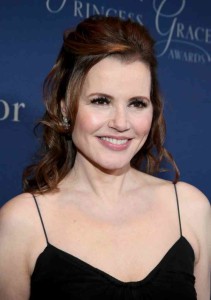 A recent picture of Damn Is She Hot Or What! …er…I mean Geena Davis.

The Fly, Cutthroat Island, The Long Kiss Goodnight.  Just a sampling of the reasons that Geena Davis should be on your crush list.  Oh, and she’s remarkably burning hot! I even loved her little Girl Friday turn in Fletch so much that I missed her dearly when they made that terrible sequel!  I’ve been in love with Geena Davis ever since a young BoyWithPez saw her in a Knight Rider episode as a cat burglar.  I also remember that Transylvania 6-5000 was in heavy rotation on cable at the same time that The Fly was in theaters.  My little pre-adolescent mind was blown.  Then, as I got older, Ms. Davis started kicking everyone’s ass in the movies.  The third act sword fight with Frank Langella (of all people) in Cutthroat Island still stands out for me as one of the best in the genre. She was so remarkably believable as a government assassin in The Long Kiss Goodnight that I was genuinely afraid of her! 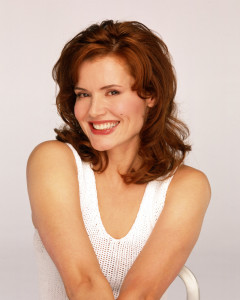 I had something to say here, but I forgot it. I mean, look at that picture! Can you remember what you were going to say?

Geena Davis also has an Academy Award, and for good reason.  The Accidental Tourist is a great movie (based on a great book, I might add), but it is somewhat dour and offputting.  Except for Geena Davis’s involvement.  My, how she does shine in that movie.  Check out any of the titles I’ve listed here and you’ll be in love with her, too.  If those aren’t your cup of tea, there’s always Earth Girls Are Easy…but I sincerely doubt that if you didn’t like those others, you’ll like that one any better.  It is supremely funny, though.