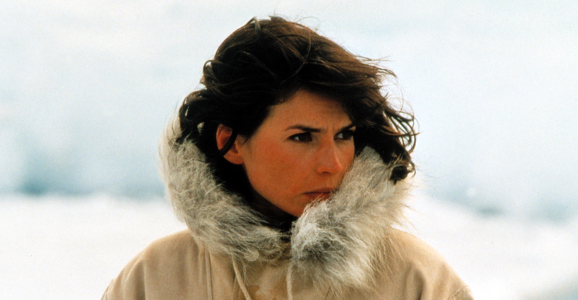 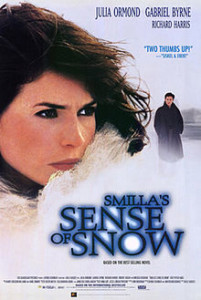 Okay, so there’s a bit of a reach of the “iceboundedness” of this particular title, but it’s there.  And it’s in Smilla’s sense of snow that makes her a worthy adversary in the seas off the coast of Greenland in this films stunningly dumb third act.

That being said, there’s a lot going on here, and not all of it is bad.  Julia Ormond as the title character Smilla Jasperson is perfectly cast.  Cold, beautiful, out of her element, and contentious, the movie is worth watching for her performance alone.  While I’ve never really seen Julia Ormond develop chemistry with anyone, she manages to do so here with Gabriel Byrne.  That’s not really to Ormond’s credit, as I defy you to find someone who didn’t have chemistry with Gabriel Byrne.  The plot is ludicrous when you get right down to it, but the two/thirds of this movie that are good are so good that it helps water down one of the most derailing endings in modern film history.  The crux of the story is the identity of the murderer of a six year old boy.  That should be able to carry an entire film.  It should be.

The music here by Hans Zimmer is another standout, as is Smilla’s relationship with Isaiah (the murdered boy, played by Clipper Miano) told through flashback.  It is through her interactions with this little boy that you learn that there is a functioning, caring human being under Smilla’s abrasive nature (which really shouldn’t be written off as “I’m Inuit…”  what a lazy, bullshit excuse not to fill in a character).  The music, some of the performances (you can’t get me to agree that Richard Harris wasn’t doing this for a goddamn paycheck and nothing else), and some beautiful cinematography all play well together…but that ending.  Anyways, check it out for 66% of a very good movie!