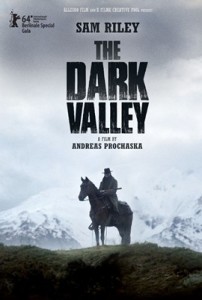 An Alpine-set, German language film starring an Englishman and, it’s a Western?  With that kind of pedigree, The Dark Valley should have fallen flat on its ass, and while it doesn’t soar to the moody heights it sets for itself, it is, most definitely, worth your time to see. Just for the spectacle its description promises!

I’ll admit to being wary coming to the film because it was pretty obvious early on that revenge was being used as the protagonist Greider’s motivation.  I think it is a narrative ploy used far too often in “Westerns”, especially modern ones.  That being said, the man playing Greider, Sam Riley, is amazing in this movie, and when he’s onscreen, he manages to make his presence known in such a way that you become nervous for what he’s going to do when you don’t see him.  Not to mention that the revenge he exacts on the small Alpine village that has some ridiculously disgusting and strange customs is done in such an over-the-top, gory way that you should be nervous when you don’t see him!

I guess the lesson you should take away from this movie is that if you know you’re going to be in a gunfight, you should bring a lever action when you know the natives are using one-shot breech loaders.  Superior equipment wins every time!