I am a big fan of Wonder Woman, when she’s written correctly.  When she’s not a man-hating girl-power spewing feminist archetype.  Now, I know that description is bound to draw ire, but the truth is I read comic books for the action and the soap opera of it all.  And in the New 52 incarnation of Wonder Woman, the combination of Azzarello and Chiang provided that in spades, and the results are nothing short of amazing.

The Diana I enjoy reading about is the Warrior Born.  The one who’s looking to overcome the hatred and small-mindedness of the world abroad.  And, if you get out of line, she knows how to deal with you…like any other costumed superhero would.  The fact that she’s a woman, in her best stories, has nothing to do with it. (Though in some of Gail Simone’s titles, her femininity was played up to great effect, and if you haven’t checked out some of Wonder Woman vol 3 (before the New 52 shakeup), you really should…Just not the beginning of it.

The theme of the first trade paperback collection of the New 52 Wonder Woman is family, and the sudden revelation that Wonder Woman actually has a father in the New 52 (as opposed to being made of clay like her original continuity counterpart) and the problems that go along with having an unknown family.  That fact alone turned off ThatWeirdGirl, who is a staunch Wonder Woman fan. I kept telling her she was missing something special, but she still has yet to read it.  More’s the pity for her, as far as I’m concerned. I love everything about it. I love the costume redesign, I love the power upgrades, I love the way Cliff Chiang draws her as someone whose strength is not the product of huge muscles, but magically imbued. This is a beautiful book, and Brian Azzarello really has a handle on this world and this character. So, leave your expectations at the door and dive into the New 52.  This is the perfect place to start, and Chiang and Azzarello’s efforts have made for some of the most compulsively readable superhero comics I’ve read, ever. 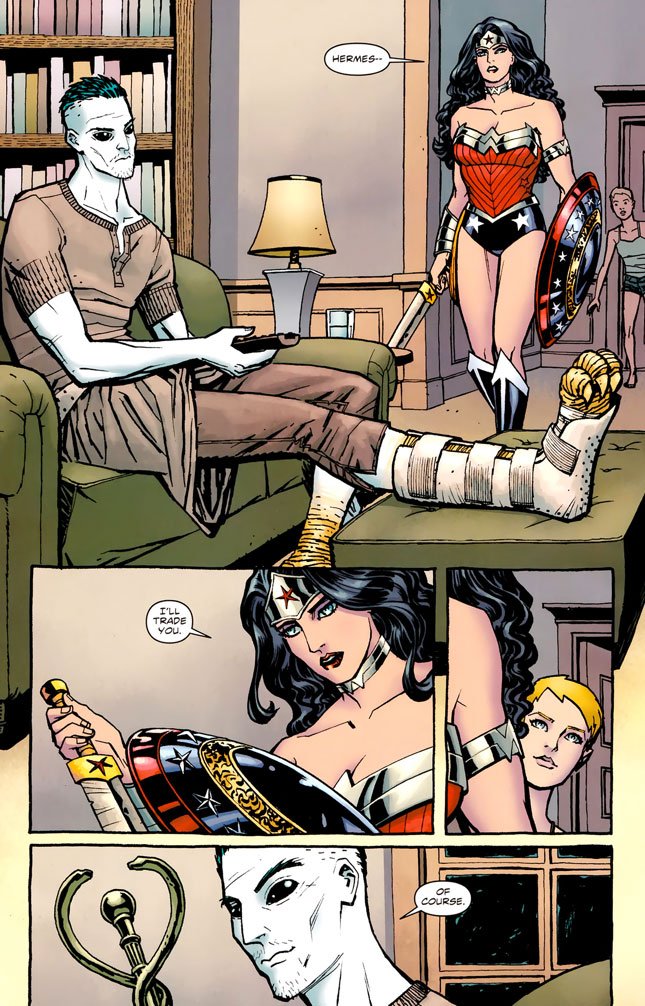