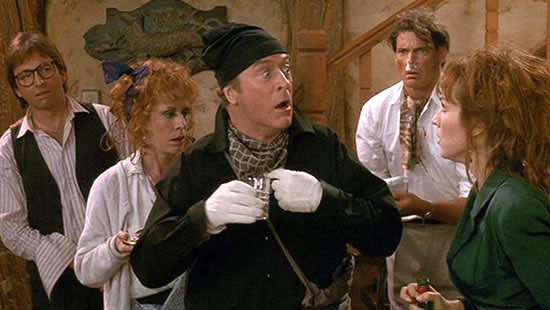 Noises Off! is our sixth episode of season two Find That Film. I think we’ve got our schedule locked and are working to create a season full of variety. This one, for instance, is a movie directed by Peter Bogdanovich about a play directed by Michael Caine‘s Lloyd Fellowes. It bombed at the theaters which is a damn shame because it’s one laugh after another.

Most critics panned the film due to their innate hatred of all things Bogdanovich. Don’t let his attitude towards the press affect your enjoyment of a stage classic. Would Carol Burnett, Caine, Christopher Reeve, Marilu Henner, John Ritter, et al, make a bad movie? I don’t think so.

Carol’s Dotty is a famous actress who produces and stars in the production of Nothing On. She brings along her lover Gary (Ritter) and her old drunk mentor Selsdon (Denholm Elliott). Belinda (Henner) fuels the backstage gossip–there’s always someone. Freddy (Reeve) just wants to understand his character and Brooke (Nicolette Sheridan) just wants to understand. Poor Poppy (Julie Hagerty) and Tim (Mark Linn-Baker) strive to make the intense director’s vision work even though the cast is insane. The timing is impeccable. The laughs are non-stop.

If you can find this fun farce in a local community theater, do so. If you can’t track down a stage show, then Find That Film Noises Off!