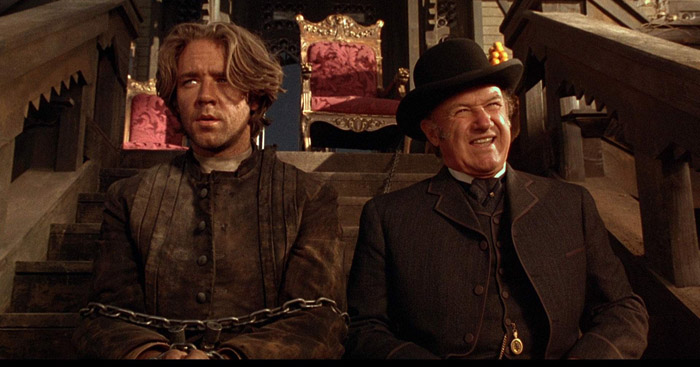 For the penultimate episode of season 2, we have chosen the Sam Raimi spaghetti-esque westernlike The Quick and the Dead, a movie somewhat infamous for starring Sharon Stone as a rough and ready gunslinger.  But this movie is so much more than Basic Instinct on the high plains!  (Actually, it’s nothing like that, but now that I’ve said it, you really want to see Basic Instinct set in the American Old West, don’t you?)  There’s a little something here for everyone.  If you like serious drama, this movie stars Gene Hackman, Leonardo DiCaprio, and Russell Crowe.  If you’re a fan of shots from the point of view of projectiles, well, you’re in luck!  This is a Sam Raimi movie, after all.  And it involves a quickdraw competition, so, you know…projectiles aplenty!  There are several reasons we ask you to go out and find a film, but this one is almost pure entertainment.  So go out and find The Quick and the Dead, listen for the click before the clock strike.  It should help you cheat your way to victory.