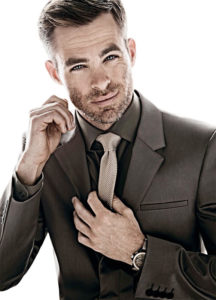 I can admit it took me a while to warm to this week’s Hot Nerd Crush, but warm I have. I can also admit his portrayal of Steve Trevor made me take a fourth look at the man. What I found was indeed crush-worthy: Chris Pine.

Since I was not a Princess Diaries kind of person, I had no idea how long his fan base has been obsessing. He broke out in The Princess Diaries 2 and worked in a stream of movies of varying quality. Then it happened. He stormed into movie blockbuster land with Star Trek.

Chris Pine was kind of the unknown quantity going into the new Star Trek universe. The public had solid expectations for Zachary Quinto, Karl Urban, and Simon Pegg. No one really knew what to expect from Chris Pine as James Kirk. However, most of us were sold within the first 60 minutes of the movie. He has become more Kirkian than Shatner for many fans.

We applauded his voice work for Rise of the Guardians on Find That Film. His voice credits include video games, narration, and Robot Chicken. Additionally, he has shared his comedic chops in a few shorts, SNL appearances, and comedies like Horrible Bosses 2.

He hit nerd superstardom after the consecutive releases of the third Star Trek, Wonder Woman, and A Wrinkle in Time. Sure, Chris Pine isn’t just a super nerd icon; he’s a proven actor who can break your heart, make you laugh, and twist your guts.

Keep an eye on his upcoming work. He has a second Wonder Woman movie and maybe a Star Trek on the horizon. There’s quite a bit of buzz around the Patty Jenkins helmed mini-series I Am the Night. Be prepared to find a washed-up reporter indescribably sexy.