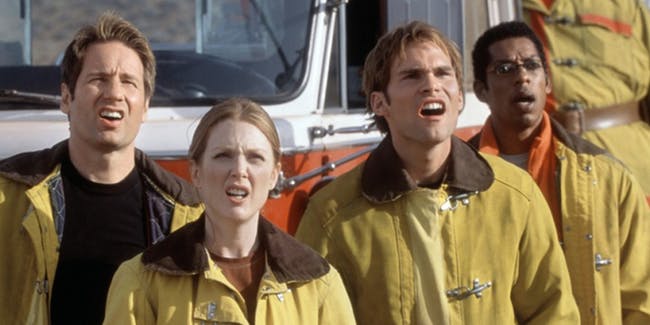 Back in 2001, the film comedy as a genre that people regularly went to the theater for was beginning to change, and, in my opinion, not for the better.  So leave it to Ivan Reitman, a director with a proven track record in comedy, to bring a throwback to one of his earlier films:  Ghostbusters.  Evolution is very much its own film, and yet, comparisons can and will be drawn, to Evolution’s detriment.  And yet, Evolution succeeds on all fronts.  It’s one of the funniest movies ever, the science fiction is science fiction-y enough, and it has a satisfying act structure.  Hell, it made $100 million at the box office, and was still considered a misfire, what with its $80 million budget.

A meteor crash lands in the Arizona desert, bringing with it a lifeform that rapidly evolves from single-celled organisms to dangerous animals in a matter of days.  Drs. Ira Kane (David Duchovny)and Harry Block (Orlando Jones), two professors from the local community college are on the forefront to protect Earth from this threat, before the military steps in (led by General Woodman played to smarmy perfection by Ted Levine) with a CDC representative (Julianne Moore) to place tight restrictions on their access.  The monsters get underestimated, and Ira and Harry enlist the help of a fireman trainee (Seann William Scott) to help them save the planet.  The chemistry between David Duchovny and Orlando Jones by itself is a solid reason to watch this movie, and they are remarkably funny together.  By making a comedy first and backing it up with a solid science fiction action film, Ivan Reitman ultimately serves up a satisfying movie that is worth your time to find.  Just remember to bring your Head and Shoulders.